25 Popular Street Food & Snacks to Try in The Philippines

The Philippines used to be a hub for trading silk, spices, porcelain and other valuable commodities to foreign merchants. Thanks to these foreign influences, we have very interesting food choices when it comes to Filipino cuisine.  Most Filipino street snacks are sinful and laden with calories – the result of the deep-frying process and the coats of sugar that often envelope it.
And since we are a resourceful bunch, we find (unconventional) ways to put food on the table and try our best to not throw away a good rope of intestines or a pair of ears. This is probably why we are known for our penchant for fear factor-quality exotic favourites like duck embryo, and pig and chicken internal organs. Your taste buds will surely have a gastronomic adventure that will make your trip to the Philippines a unique experience.
Tara, let’s dig in! Image Credits: Wikimedia Commons
This is a favourite afternoon snack among Filipinos. A local banana called “saba” is coated with brown sugar, deep-fried in oil and skewered on a stick a la barbecue. Aside from banana, there’s also kamote-cue, a sweet potato variety prepared and cooked in the same process. 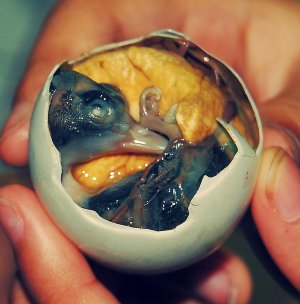 Image Credits: Shankar S
The ultimate exotic Filipino street food – balut. Balut is a developing duck embryo, boiled and eaten in one gulp.  It is said that balut is high in protein and acts as an aphrodisiac. When eating a balut, crack the round side of the egg and drink the warm and tasty soup inside. Add salt and vinegar for flavor then swallow everything in one swoop. 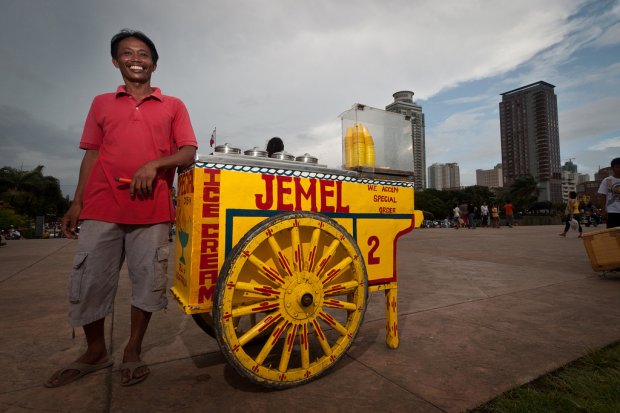 Image Credits: Patrick Jude Ilagan
These street soft serves are not exactly dirty. The name was coined from the dodgy appearance of the carts owned by the ice cream vendors. Flavors often come in chocolate, ube (purple yam) and cheese. They are pocket-friendly and can satisfy your sweet cravings on a hot day. 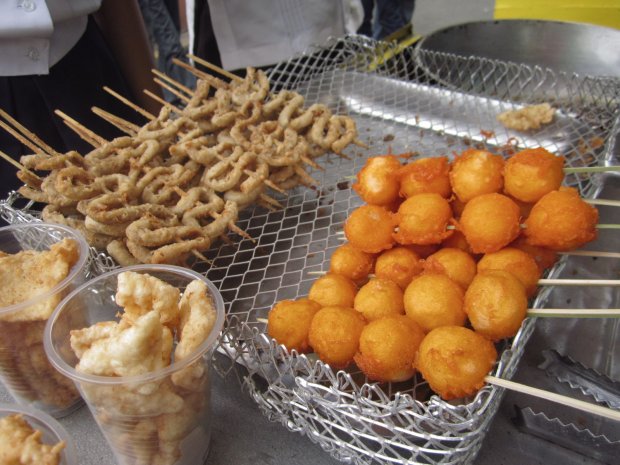 Image Credits: Wikimedia Commons
At first glance, you will mistake them for Dunkin’ Donuts’ munchkins. Kwek-kweks are hard-boiled quail eggs coated with orange batter and deep-fried. When chicken eggs are used, they are called tokneneng. 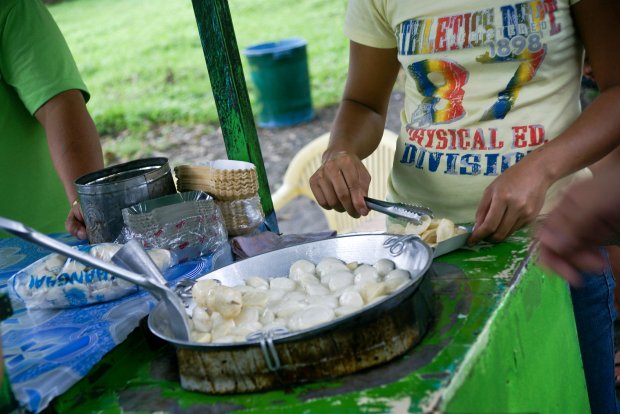 Image Credits: Zack Lee
This snack is round, fish-flavoured dough that is deep-fried in a wok. Vendors usually spear the balls using barbecue sticks then dip them into flavourful sauces: sweet, spicy or a mix of both. Image Credits: cebuanawithlove
A cheaper version of Japan’s tempura, this snack has almost the same recipe as that of fish balls except that it is elongated with pointed tips instead of round. They are deep fried until golden brown and dipped into your choice of sauce: sweet and sour sauce, spicy sweet and sour or red onion and garlic vinegar sauce.
Also Read: 20 Reasons Why You Must Visit The Philippines 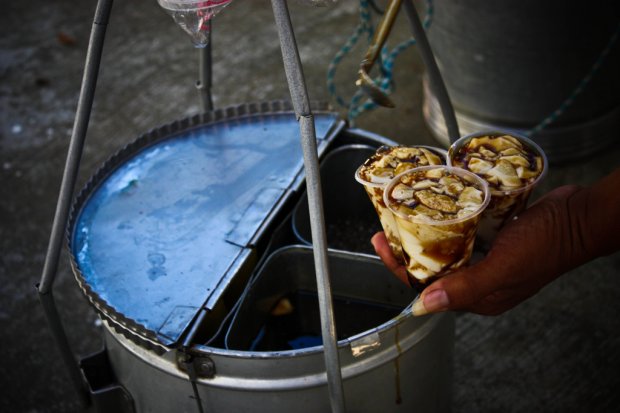 Image Credits: Ludwig Simbajon
Tahos are typically hawked by vendors traveling by foot, carrying two large aluminum buckets hold aloft by a long stick over their shoulders while calling “tahoooo!” It is a warm, fresh soft bean curd with a richer volume sweetened with caramelised brown sugar syrup and accompanied by small tapioca balls called “sago”. In Baguio City, they have their own unique version of strawberry taho. It is said that taho is from China, adopted by the Filipinos. 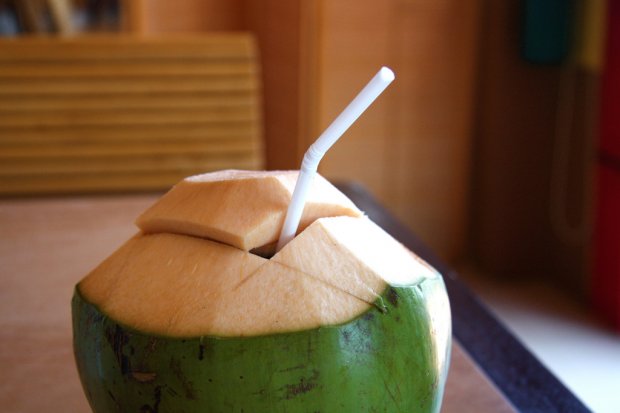 Image Credits: eLjeProks
Being in a tropical country, the Philippines is blessed with coconuts. Street vendors simply slice the topmost part of the shell and then serve it. After drinking the juice, you may ask the vendor to give you something to scrape off the juicy flesh with. Image Credits: emptyspaces
Derived from the Filipino term “paypay”, bananas are partly divided and spread to create a fan-like shape. They are then coated in flour with a pinch of achuete, deep-fried and sprinkled with white sugar. They are also called maruya. 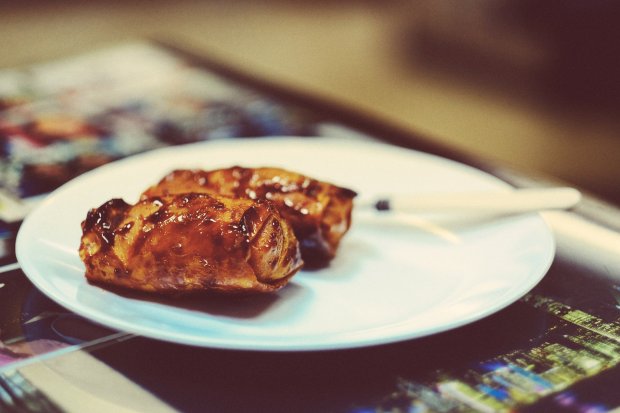 Image Credits: Daniel Go
Crispy on the outside and mushy on the inside, turon is a spring roll-like variety but with banana filling inside. Sometimes, jackfruit is included for added flavour. 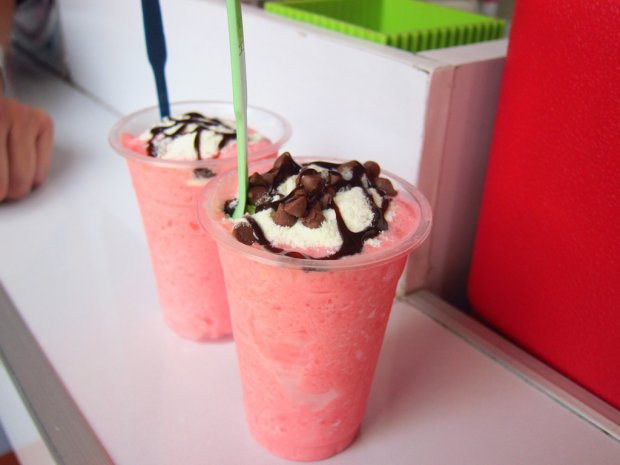 Image Credits: lynne-enroute
This sweet slush is made from banana- or vanilla-flavoured frozen condensed milk. The origin of iskrambol dates back to the 1970s when it was popular as a street food in Manila. Iskramble stalls are usually stationed near elementary schools or high schools to cater to kids in need of a sweet fix. Image Credits: Wikipedia
A variety of fried vegetable spring roll, lumpiang togue is stuffed with sautéed mung beans rolled in egg wrapper, and then fried until golden brown. Best paired with spiced vinegar, this snack is available in pungko-pungko*. Image Credits: Lynetao
A popular favourite at pungko-pungko*, this is a traditional Filipino dish made from pork or chicken omentum (omentum refers to the fat-filled sac covering the small intestines). It sounds gross but it’s addictively delicious and crispy, with a mild flavour that spikes when you dip it to a powerful sauce.
Note: Pungko-pungko is a Cebuano term which translates “squat” in English. It refers to a place to eat wherein customers have to sit low benches or crouch down to eat as vendors serve the meal. Utensils are not available; diners will have to eat by hand. Other prefer wrapping their hands in plastic to avoid getting oil on them afterwards. 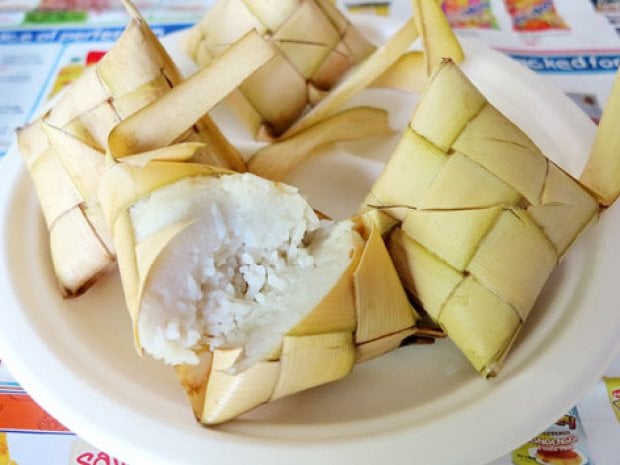 Image Credits: Eatyourworld
Hanging rice or puso is a staple in Cebu. It is commonly found in Indonesia and Malaysia by the name of “ketupat”. Also known as “packed rice” where rice grains are packed inside woven young coconut or palm leaves strips formed into a diamond-shape, pusô is available in every pungko-pungko for its convenience to diners. Pusô is best eaten with barbecued meat. 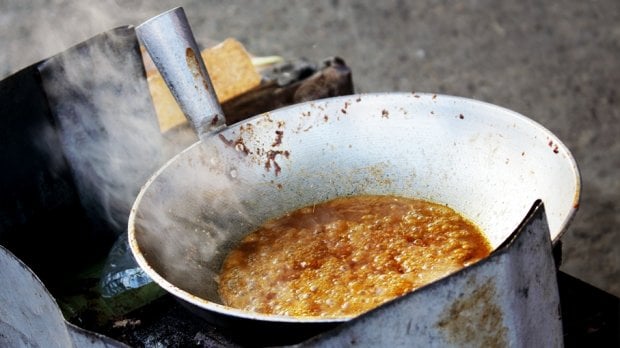 Image Credits: Hangingrice
This dish’s name is based on the process of eating it. “Tuslob” is Cebuano for “dip” while “buwa” means “bubbles”. When translated to English, it means “to dip into bubbles”. Ingredients include pork liver, pig brain and intestines, oil, onions, fish sauce or soy sauce, a “secret” soup stock and other various seasonings such as chili flakes and shrimp paste. Ingredients are cooked until bubbles surface. Pusô is then dipped into the bubbly concoction. 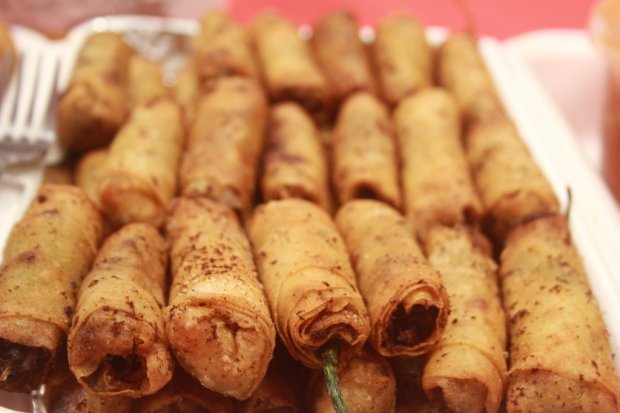 Image Credits: Jenea Medina
Dynamites are green chilies wrapped in egg rolls and stuffed with meat and cheese slices. These hot numbers are deep-fried until golden brown then served with ketchup and mayo dip. 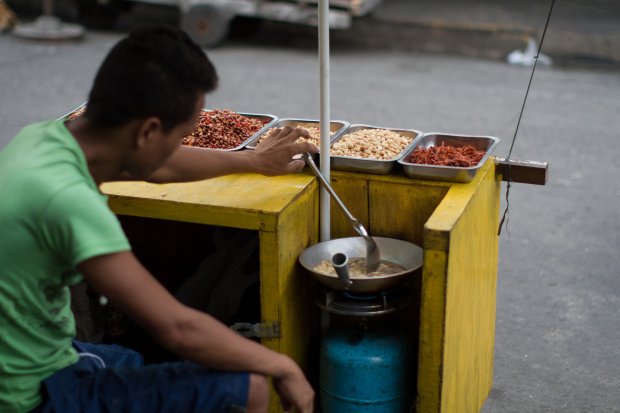 Image Credits: mykitchenandyours
Also known as “hilaw na mangga at bagoong”, the fruit and fermented shrimp may not be everyone’s favourite but Filipinos love this. It has to be green mango, not the yellow ones. The green mango‘s skin is peeled off and the yellow fleshy part is cut into thin slices. To enjoy the snack, dip a portion of sliced mango to the shrimp paste. 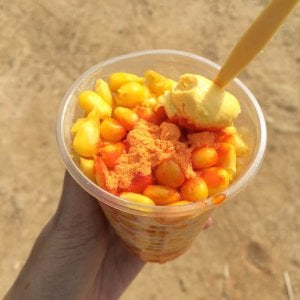 Image Credits: Maxine
Boiled sweet corn is seasoned with salt, margarine or butter. Some serve it on cob; others serve it in cups filled with corn kernels mixed with cheese powder and butter. 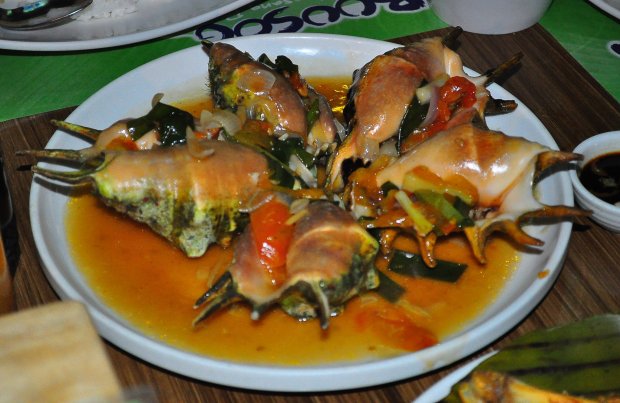 Image Credits: Whologwhy
Seafood lovers tend to be addicted to these shells. Also known as “conch”, vendors cook the shells by boiling it with water. They use hammer to crack the conch and get its meat. Then they slice it to bite-size and skewer it with a stick. The meat is sweet, juicy and tender when dipped with a glass of spiced vinegar.

Image Credits: nimblesense
Tenga translates to “ears” in English. These pig’s ears are marinated and then grilled on skewers. 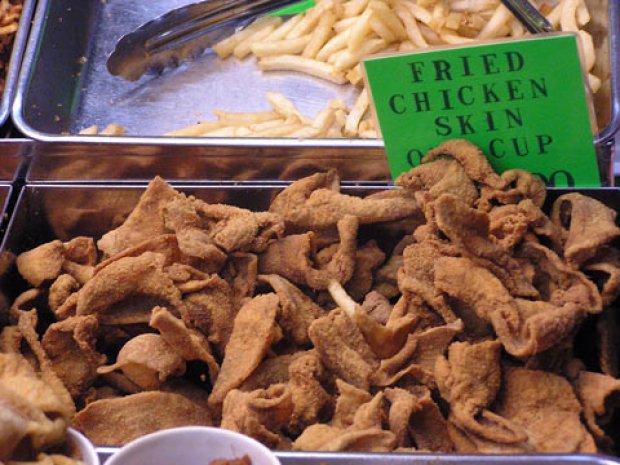 Image Credits: Phil Lees
Oozing with calories, deep-fried chicken skin is one of the roadside guilty pleasures. Filipinos call this snack “chinks”, not to be confused by the Spanish-originated snack of fried pork skin that is widely-known as “Chicharron”. 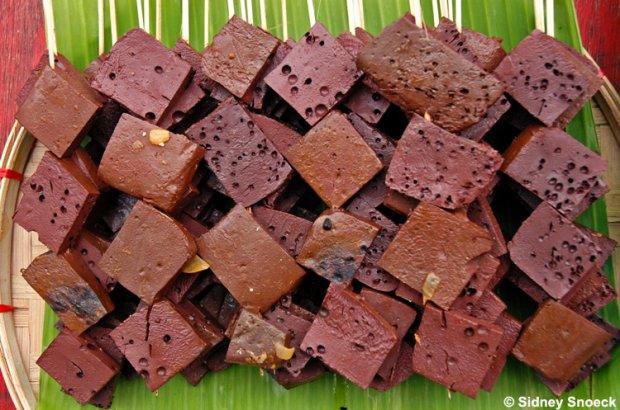 Image Credits: teamliquid
Grilled dried pig or chicken blood is sliced into small little cubes. It is then skewered and dipped with vinegar and onions sauce. The cubes are identical to the shape of a Betamax tape (a type of cassette), hence the name. 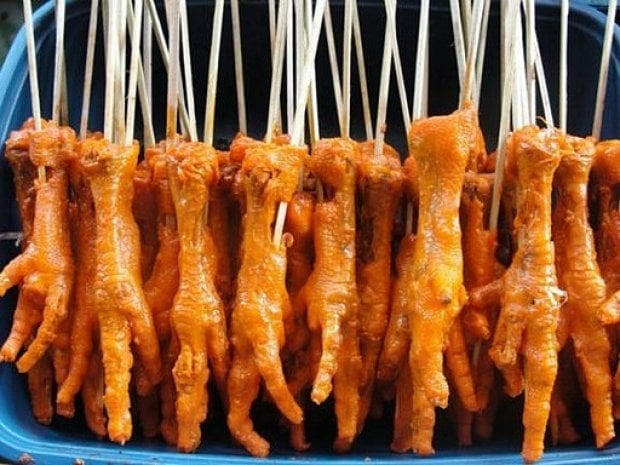 Image Credits: foodtrip22
We have to thank the Chinese for their influence of this side street treat. These are marinated chicken feet, grilled and skewered. The snack is fondly named after the German shoe company logo due to its three stripes. 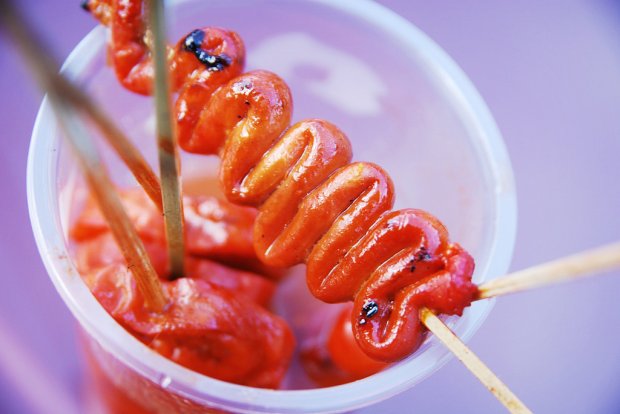 Image Credits: Anna_d
Isaw is made from barbecued chicken or pig intestines. The intestines are turned inside out and cleaned thoroughly. They are grilled and skewered on barbecue sticks then dipped with spiced vinegar.
Are you feeling hungry now? What are you waiting for? Book a trip to Philippines now to try these awesome street foods!
This article originally appeared in Tripzilla Magazine on January 21, 2015.

Red Maleta Eats: All Tummies are Happy at “Happy Tummy”