Exploring Poblacion in Makati is every foodie’s haven. I visited Agimat Foraging & Bar the other night for Filipino cocktails and to get inspo from its resto concept. The Kismet Cafe‘s bartender recommended a not-so-secret vegan-vegetarian restaurant that only vegans or vegetarians know about it, called Cosmic. Since it was just a few minutes’ walk from my hostel, I explored the streets of Poblacion with the help of Google Maps.

I was told that Cosmic is an “underground” restaurant, which ironically is located on the second floor of a random building. I was only given the instruction to go to P. Burgos Street Corner General Luna in Poblacion, look for the Mini Stop, watch out for the eye symbol signage, and go up the second floor for the resto. As interesting and intriguing it sounds, unfortunately, I was really hungry and I need to find it fast.

I ditched hailing a motorcycle since it is supposed to be nearby from my hostel. I spent a few minutes making turns and asking people for directions. Finally, I saw Mini Stop!

Since there was no signage on the resto (as expected), I asked a tiangge girl (stationed outside) if there was a resto above Mini Stop. She pointed me to a small doorway that has stairs leading up to the second floor.

According to my friend, I just need to follow the 👁️ symbol which I found inside the passageway. At the top of the stairs, I saw the poster with an arrow below it.

I followed the arrow that leads to a glass door that also bears the eye logo.

The ambiance is pretty cozy with mismatch chairs and barstools. Murals of plants were decorated on the wall near the counter. I propped myself on a barstool and informed one of the waiters for my order. I was happy to see that my bartender friend was also in the restaurant having dinner.

I noticed that whenever I travel alone and I visit a random restaurant, they would really take notice and pay attention to my needs and requests.

Since it was my first time to eat in a vegan restaurant, and the waitstaff suggested one of their bestsellers: Vegan Spinach Lasagna.

The photo above is their house specialty Vegan Spinach Lasagna. It has marinara, vegan bechamel sauce, spinach, button mushrooms, faux “bacon” bits, and olive oil. It was so good that I want to consider converting into a vegetarian. I didn’t know that eating healthy can be so delicious!⁣ 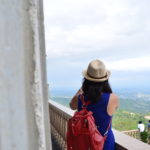