They say it can’t be done. Challenges are the secret ingredients to make the project successful. They can be in a form of bad weather, school exams, ingredients and a vehicle accident that might put the competition on hold. Nevertheless, the production team and the students were strong enough to withstand force majeures and came through (almost) unscathed.

We followed the journey of the thirteen schools down to the top three on their battle to be the first Julie’s Chief Baker Student Edition Grand Champions.

Here’s a brief background for the top three schools:

James Arnie Wenceslao, Apple Rose Wenceslao, and Gayle Angelee Aragones made up the CTU-SF team. They almost did not make it in time for the competition for one challenge due to bad weather. Fortunately, a passenger saw the students on TV and on YouTube, gave up her seats for them, and their coach, Ronald Ramirez. The competition starts before they cross the sea. They are an emotional hardworking bunch and deserve a spot on the top three.

Mandaue City College have to make their creative breads without proper kitchen equipment. In fact, they showed a bare room as their “kitchen” on TV. In fact, the students turned one room into a cafe to help raise funds for their practice ingredients. A classmate even offered to lend them an oven to practice on during the competition. In spite of their challenges, they managed to pull off memorable dishes such as their Squid Ink Bread and incorporate tablea as an ingredient in their products, which brings out the Filipino signature in their baked creations. We salute Frites Regodo, Isabil Gonzaga, Janrey Lopez and coach France Byron Guiuan for their clever and adventurous baked goods.

Lastly, the confident talented bakers of Benedicto College proved that even though they got the boot during the cupcake challenge (this episode was inspired from the Cupcake Wars and The Apprentice), they made a good come back with their Perfect Combination bread as an entry to the wild card challenge. Ralph Louther Lambo, Ma. Cristina Zapatalo and Tricia Me Jopia, along with their competitive coach Staphen Dave Ponce proved to the audience that no cupcake can stand between them and the trophy.

After more than one year of brainstorming and three months of production, the Julie’s Chief Baker decided to end their premier season with a bang by bringing in two celebrity chefs, Chef Roland and Jackie Laudico, with a special performance of Bamboo at The Terraces, Ayala Center Cebu.

On April 13, 2014, all the thirteen colleges and universities come together for the proclamation of the first (ever!) Julie’s Chief Baker Student Edition Champion. The intrepid seafarers of Cebu Technological University San Francisco Camotes came in second place, finishing the first place are the innovative student bakers of Mandaue City College and the Julie’s Chief Baker Student Edition Champion title goes to the awesome bakers of Benedicto College.

Hats off to the team behind the Julie’s Chief Baker project. Congratulations for making (umm..baking) history!

PS: For those who missed the premiere season airing on Sky Cable last February to May, Julie’s Chief Baker Student Edition episodes are being shown on CCTN 47 and Sky Cable 38 in Cebu, and CCTN channels across the country. You can catch them in action on Mondays, Wednesdays and Fridays at 9 am and replays at 6 pm. And Sundays at 1 pm and replays at 5 pm. 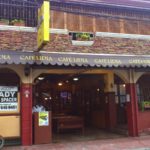