How I discovered the existence of this Asian resto? It all started with a red-orange wall selfie with plates.

It was a lazy Wednesday, perfect for #stresseating. Kareen and I made plans to have lunch at Oriental Spice Gourmet (OSG) in Basak, Lapu-Lapu City.

To a passerby, it’s just an ordinary building. The ambiance is minimalist but injected with art. Like the intricately-designed lamps and hand-painted walls.

As we are seated, we want to stick to the safe dishes like Pad Thai and Tom Yum Chicken but a lady in red approached us. She asked us if we are first-timers and recommended the Wednesday special: Hainanese Chicken Rice and pair it with Mee Goreng.

When we started taking photos of the interiors, the lady went up to us and inquired if we are bloggers. We don’t usually broadcast it to the world that we are, because we don’t want to be treated special. We want to experience the real service. Not the polished over-the-top attention that establishments usually shower on media and bloggers.

Oriental Spice Gourmet, aka OSG, has been in business for quite some time. They used to have a 15-seater resto before but now, they got relocated to a bigger and brighter space. Owned by a Chinese-Malaysian British citizen chef, Cyril Sia and architect, real-estate businesswoman, Mary Ann Tan, OSG’s claim to fame is world-class Southeast Asian cuisine that has no MSG. Their advertising medium? Word of mouth and digital reviews by bloggers and Trip Advisor.

They only use the finest ingredients from Singapore and Malaysia but charges the customers affordable prices. That’s because the restaurateurs owned the building. Mary Ann shares that soon they might open the second floor for KTV by reservation. Preparation days are on Mondays and Tuesdays, hence no operations on those days.

The couple used to travel twice a year to purchase special ingredients and supplies, due to its booming business, they now travel four times a year.

Mary Ann makes time to talk to her customers. If you are a first time visitor, she can recommend dishes that will suit your taste. Say for example, for Koreans and Germans, she suggests Pad Thai. She acquired this over the years through her customer interaction with foreigners and locals banking on their nationality and taste preference.

When they first opened OSG, her customers are usually expats. American and European businessmen graced the dining halls for 2 years. According to her, if you serve good food, you get good friends in return. Most of her returning customers are visiting CEOs around Lapu-Lapu City, looking for authentic Asian cuisine.

Aside from personalized service, OSG prides itself on its fast service. A customer once made a comment that they are “faster than fast food”.

Since they still advertise by word of mouth, OSG can still be considered a “hole-in-a-wall”. Mary Ann chimed in saying they are now a bigger hole-in-the-wall.

Before I decided to collect fridge magnets while traveling, I planned to collect plates from every place I visited. Due to its rarity, I settled for magnets instead.

Mary Ann explained that her plates are her prized collection of 23 years. They have them shipped all the way from UK. They subscribe and pay to get those pretty plates here in the Philippines.

There was once a wife of a Japanese national who broke one of her plates to smithereens while doing a selfie on the wall. The Japanese promised to replace it but couldn’t find a similar one because they are limited edition. He gave Mary Ann 2 beautiful hand-painted plates with bird design instead. Trigger-happy addicts, be careful in taking photos to avoid such incidents. 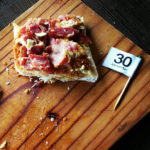 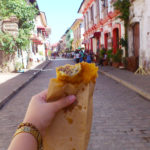