Behind the Scenes: Sinulog Float 2017

We usually have lots of projects this January. There’s the January 6, our company anniversary/ founder’s day which has now evolved into National Pandesal Day. Second, there’s our traditional feeding project for 3,000-4,000 devotees in Compaña Maritima (the day before the grand parade). And lastly, the Fluvial parade (which we canceled due to weather conditions) and Sinulog float (which was subject to several years of criticisms and controversy).

I failed to join the Devotee City feeding this year. I experienced it for 2 consecutive years. This time, I headed the project but turned it over to someone (for the execution part) since I have more important things to do like making sure the float arrives on time from Cordova to the assembly area.

It is my first time to join the Sinulog grand parade in my almost-4 years stint in the food industry. I’m extra careful on monitoring the budget and the float must be 100% awesome. Thanks to a recommendation from a friend, we met a real artist/float designer.

Ideally, the float must be created within one month and a half right after the approval of the design and down payment.

Fast forward to third week of payment and the week before Sinulog, we were shown the photos of the float. We have a train for a design bringing Julie’s breads. #TraintoJuliesBakeshop

Check out the details.

And these are all made of styrofoam.

We could’ve won a slot in the float category but the owners just want a brand representation. Besides, the Sinulog Foundation clearly states that if you want to join the competition, branding must be 10%.

During the Sinulog week, it rained hard. We were a bit worried that the float might not be finished on time but I am confident with our supplier that he can deliver his promise. The Child Jesus granted our prayers and gave us 2 days of sun for the paint to dry.

Our float is ready to go. But the challenge is to bring the float from the float maker’s shop to the grand parade’s assembly area.

We were told to meet at 12 AM in Cordova. The supplier and his team cleared the pathway which took longer than expected. As the hours passed by and with the help of the prayers, we were able to get the float out of the shop without any harm by 3 AM.

As we made the convoy with my 3 riders, I was forced to do the hand signals from the back to guide the float as we slowly make our way to Imus Avenue. Because our pacing is really slow, some cars brushed past our float which caused some parts to fall apart. Thanks to the crafty hands of our supplier’s people, they were able to fix it.

We arrived at the assembly area about quarter to 5 AM. Just in time before the road closure.

The Sinulog Grand Parade 2017 started at 9 AM and since our float was the first one to appear from the other brands, we were able to reach Abellana grand stand by about 10:30 AM.

The Sinulog Foundation’s goal is to finish the parade by 4 PM. And it ran smoothly. Kudos to all for a successful parade! 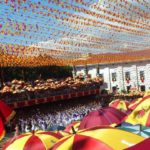