I was disappointed at leaving Vigan for Laoag. I don’t want to leave without trying on the period dresses in Arce Mansion. But life goes on and we have to move on to our next itinerary. We still have 7 and a half days to conquer.

Another 2-3 hours on the road and we arrived in Laoag late afternoon. We made Laoag our home base linking our Pagudpud and Paoay trips. My friends in Manila recommends an overnight stay to fully enjoy the experience in Pagudpud but we are on a limited time, we managed to tour both ends of Ilocos Norte in one day.

We hit the road as early as 6 am and boarded the bus at the nearby terminal that will take us to Pagudpud. It costs us 2 hours to reach our destination from Laoag. We went to see the Bangui Windmill Farm and bought souvenirs. Bangui windmill magnets/key chains and desk pen holders are much cheaper here than in Vigan.

The tricycle tour is a bit expensive in this part of the tour. We have to switch two tricycles from the windmills to Kapurpurawan Rock Formation. Actually three, not counting the tricycle we rode from the waiting shed to the windmills. Just prepare around ₱1,000 or more in case you need to switch more than 2 tricycles.

Upon reaching Kapurpurawan Rock Formation, there are already a handful of windmills scattered in the area. You have the option to walk or rent a horse on the way to the rock formations. We rent the horses anyway because we’ve never ridden any horses. Horse riding costs ₱50 per way. Due to the excitement, we missed the statue of Lam-ang battling the giant crocodile en route to the rocks.

The Kapurpurawan Rock Formation gets its moniker from the word “puraw” which means white. The rock looks like a large white dragon guarding Burgos coastline, waiting to pounce on raiding pirates. The white rock was cordoned off, visitors must content themselves by taking a photo from afar. This can be achieved by climbing a few rocks to get the perfect selfie angle.

By noon, we decided to go to Cape Bojeador Lighthouse–Gov Chavit Singson’s baluarte near the area. The lighthouse is one of the highest elevated Spanish colonial lighthouses in the country.

Visiting the Cape Bojeador Lighthouse is a mistake since we forgot we are supposed to go to Patapat Viaduct. Hunger clouded our minds which deleted the part of Patapat Viaduct in our mental itinerary and set our brains to go to Paoay which is an hour away from Pagudpud. We had another longganisa lunch at Johnny Moon Cafe (the only establishment near the highway) while waiting for the bus bound for Paoay.

In less than an hour later, we reached Laoag and switched buses bound for Paoay. Our travel mission is to visit the famous Paoay Church, Paoay sand dunes, Paoay Lake, and the Juan Luna Shrine. Due to time constraints, we only visited Paoay Church and Paoay Lake.

Our bus dropped us off the church. Paoay Church was built by the Augustinian friars using coral bricks. Since we are on crunch time, we hired a tricycle outside the church and decided to visit the Malacañang of the North but we found out visiting hours is only until 4 pm.

We settled for Paoay Lake which faces the late President Ferdinand Marcos’s former abode. Legend has it that a village used to stand in the area of the lake. God punished the people and the beautiful lake emerged. According to the fishermen, they sometimes catch fishes adorned with jewels which they believed to be inhabitants of the cursed village.

We ditched the Paoay sand dunes because there are only two of us and to fully enjoy the experience, we need to ride the 4×4 vehicle that requires more than 2 passengers to split the cost. Juan Luna Shrine, on the other hand, is located 30 minutes away and we don’t have the luxury of time.

We crashed at UKL Ever Hotel. Located in the center of the city, near the public market, restaurants are within walking distance as well as the church and sinking bell tower. The space is small but new and clean. Amenities include air-conditioned, private bathroom with hot and cold shower, phone, cable TV, WiFi access, and 24 hrs security. Guests are given a choice to choose the one with free breakfast or the one without. Our room costs ₱800 per night with breakfast. If you have a water bottle container, refills can be done on the second floor where the pantry is. 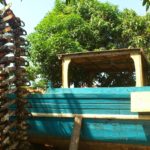 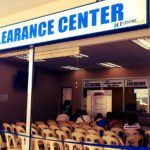 Getting an NBI Clearance at J Centre Mall on a Saturday 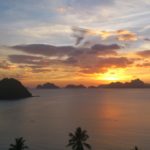