Traveling in December is not exactly a very good idea. Flights are delayed and forever waiting at the airport lounge with overpriced food and drinks. But we have to fly to Manila for the preparations of our new TVC and 2 conceptualized shoots from the giant networks. #corporatehustling

The problem about living in Manila for someone who doesn’t know how to cook is the decision to eat out. We can’t be bothered to prepare an edible home-cooked meal as we have a busy schedule. The decision where to eat lies on our stressed, fragile shoulders and craving taste buds as much as possible it is a restaurant not found in Cebu. Stomachs need not to be questioned as they only need to digest food intake.

This post is a documentation of what we ate during our two-weeks stay in Manila. Most of my meals end with coffee at Starbucks.

After arriving at the airport, we decided to have lunch at Burger King. Yes we have BK in Cebu but I haven’t tried one yet, so I gave in. I’m not a huge fan of burgers but I liked it.

During my first week in Manila, we have to go to Tiendesita‘s for a quick dinner. After dinner, we head to Starbucks at The Grove by Rockwell for some coffee.

Congratulations! We didn’t go out for breakfast/lunch/dinner because of bad weather. My boss whipped up a storm with his special adobo with steamed veggies at the staff house in Rosario. Yum!

Our meeting with ABS-CBN ended with lunch at 9501 Restaurant (where media held their press conferences with actors), followed by coffee with GMA 7 in the afternoon. When you get an agency to handle your advertising placements, it is common knowledge by both giant networks that you will be getting both of them. Friendly competition.

Lunch at Market! Market! and tambay at Mrs. Fields Cafe. I love Mrs. Fields cookies! Whenever I’ve got the chance, I would buy at least one cookie and enjoy it as much as I can. #GoodbyeDiet

Trivia: I went home on Sunday (to kiss the Cebu soil and dropped off my dirty laundry) and flew again to Manila on Tuesday (in the middle of typhoon week).

Welcome dinner at Jay-J’s Chicken Inasal at Tiendesita’s despite the bad weather. We had coffee and hot chocolate at Starbucks Silver City.

We did location ocular at the bakeshops for our segment shoot for next week. Before the production team will pick us up, we had an Italian lunch at Chef D’Angelo in SM Mall of Asia.

We’re supposed to go to the Manila team’s Christmas Party but due to transportation problems, we switched destinations and had a Thai dinner in Eastwood at My Thai Kitchen. Coffee followed at Caffe Bene and another round of coffee at Coffee Bean & Tea Leaf.

We visited Provill in Makati for the last time to give our nods to Director Mark Meily and his team. Ms. Yvonne of Manprom made her cathedral window jelly dessert and rum cake for everyone.

After we gave our seal of approval to the prod team, the Dragon Lady invited us for a toast.

But for dinner, our boss cooked us pork steak for dinner. He’s a whiz in the kitchen. All we have to do is wash the dishes in exchange for his cooking.

We had a conceptualized shoot at the bakeshop with ABS-CBN. The pre-taped segment will be aired on January 6, 2016.

Late breakfast at Subway before we hit the tiangge stalls in Greenhills. Had a Japanese ramen for lunch at Ukokkei Japan and finished all my stickers at Seattle’s Best Coffee for my 2016 green planner.

Quick breakfast at Jollibee before the shoot. After the morning hustle, we head to Yoshinoya for lunch in Glorietta. While waiting for our bosses to get back from their meeting, we hang out at Serenitea.

Dinner was scrumptious! We didn’t go out for dinner but we had mouthwatering grilled pork slabs. We didn’t mind that the staff house smelled like barbecue.

Breakfast is at Jollibee, as usual. But we had a hearty lunch at Mamou, hosted by the Dragon Lady. We got the rest of the day off, so we head to Greenhills for another last-minute Christmas shopping. Had coffee at Starbucks and dinner at Shakey’s while waiting for our Grab Car.

We woke up extra early to beat the morning airport rush at 8 am. Our flight is scheduled at 1:40 pm but we are expecting for it to be delayed. So we had breakfast at McDonald’s airport and lunch at Hen Lin. Oh and we left Manila airport around 5 pm. Surprise, surprise.

So I gained the much dreaded #holidaze weight. Guess, I will go back to the gym on January to shed off unwanted love handles. 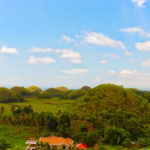 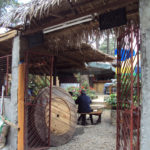