Cebuanos have something to be proud of. Julie’s Bakeshop, a well-loved homegrown brand, has continued its reach to the global market with the opening of yet another international branch. This time, in Edmonton, Alberta, Canada.

Julie’s Bakeshop Canada branch is operated by Filipino franchisee Eric Pecson and his Canadian wife Marla. Before venturing into the Julie’s Bakeshop franchise, Eric has had over 15 years of experience in the Restaurant business, currently being the Area Developer of a major barbeque brand in Alberta as well as operating three franchises of a local food brand.  A native of Balik Balik, Sampaloc, Manila, Eric has lived and worked in Canada with his wife and three children for the past 17 years.  Being in the Food industry, he instantly saw a great opportunity in bringing a highly recognizable Filipino brand to the captured market of over 30,000 overseas Filipinos residing in Canada.

Now, Pinoys will feel right at home as they wake up to the familiar look and feel of the neighborhood bakeshop they’ve grown to love back home. And like icing on a cake, add the uplifting aroma of Julie’s old-time favorite breads fresh and hot off the oven every hour and it will seem like they’re never far from home!  This will definitely be a welcome treat from the usual fare found in most bakeshops.

The sizeable Filipino community in Alberta became the primary reason for choosing the location and on its opening week, the market has been very enthusiastic and genuinely accepting.

With the initial branch now fully operational, Julie’s has set its sights on further expansion around Alberta and perhaps other nearby provinces in Canada in the near future.

To date, Julie’s takes pride in bringing fresh and hot breads to over 100 million Filipinos across the country with close to 500 branches nationwide and counting.  Now, we include a consumer base of Filipinos and Canadians who are sure to keep coming back for more! 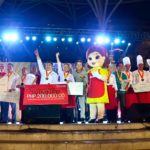