Island-hopping tours across aquamarine waters, blissful weekends on beaches, delicious food, and awesome fiestas thrown by hospitable locals – these are but some of the simple joys you can experience while travelling to one of the Philippines’ 7,107 islands.
The Republic of the Philippines is an archipelago country divided into three main geographical regions: Luzon, Visayas and Mindanao. It is located in Southeast Asia, near the equator, so tourists and locals enjoy sunny weather (interspersed by occasional monsoons) spread all throughout the year.  Long weekends are abundant due to special holidays honouring late presidents, heroes and Islamic traditions.
In addition to the rich culture, heavily influenced by the Spaniards and a bit of Asian traditions, there are twenty reasons why the Philippines should be in your travel bucket list. 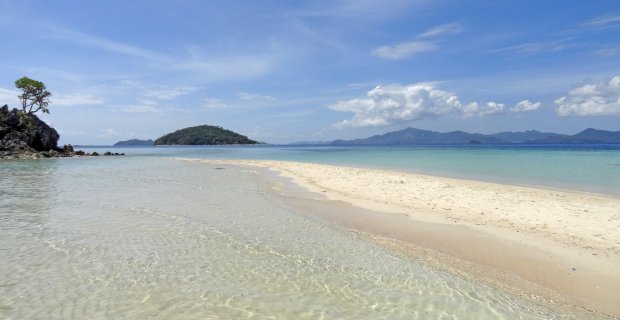 Image credit: Alberto Moreno
If you love Vietnam’s Ha Long Bay or Thailand’s Krabi, you will be reminded of their beauty in El Nido, Boracay, or Camiguin. The Philippines is blessed with jaw-dropping coastlines and is a paradise for beach lovers.

Image credit: asteegabo
Tying in closely to beach getaways are island adventures. Hundred Islands scatter across the cerulean sea in Alaminos, Pangasinan.  Enjoy a quintessential island hop where you will be visiting 123 islets covering 1,844 hectares. There are four major developed islands, namely the Governor’s Island, Quezon Island, Marcos Island and Children’s Island. Thrill seekers can rough it out with tent rentals costing Php 400 (SGD 12) or they can rent open cottages priced at Php 300 (SGD 9). So beautiful are the many islands in the Philippines, and they are strong rivals to the gorgeous islands in Malaysia and Indonesia.

3. The chocolatey feast (for the eyes) 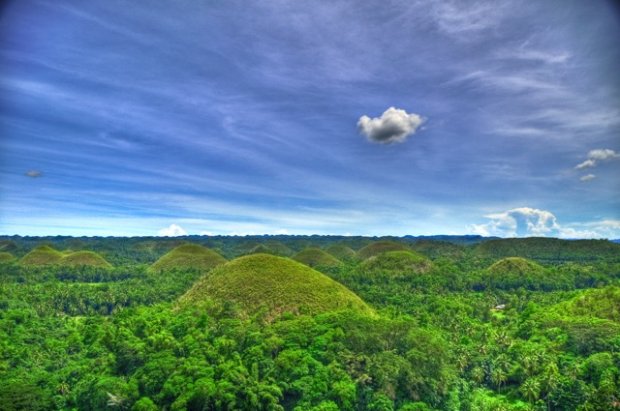 Image credit: Wikipedia commons
If there’s one place you can enjoy chocolates without experiencing a sugar high, it’s the Bohol Province. It is the home to at least 1,260 (there could be as many as 1,776!) Chocolate Hills, which get their names from the green grass that turns lovely shade of chocolatey brown during summer. Legend has it that a giant fell in love with a mortal maiden. When the maiden died, the giant was so heartbroken that he could not stop crying. As his tears dried, the hills were formed. 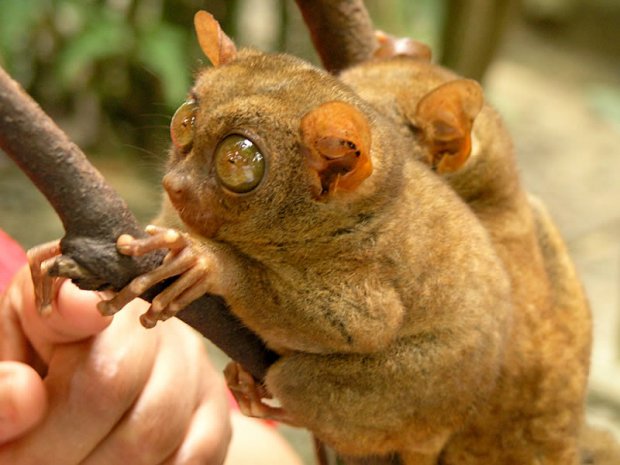 Image credit: Roberto Verzo
While in Bohol, be sure to look out for tarsiers, one of the smallest primates living on Earth. Measuring just the size of your palm, these wide-eyed nocturnal creatures are often shy and nervous. They get stressed easily, especially when held in captive. Visiting tourists are advised not to use camera flash when snapping photos as this could alarm the these tiny monkeys and cause them to hit their heads against objects, potentially resulting in death due to their thin skulls. They live in pairs, and if their mate dies, the other usually commits suicide. 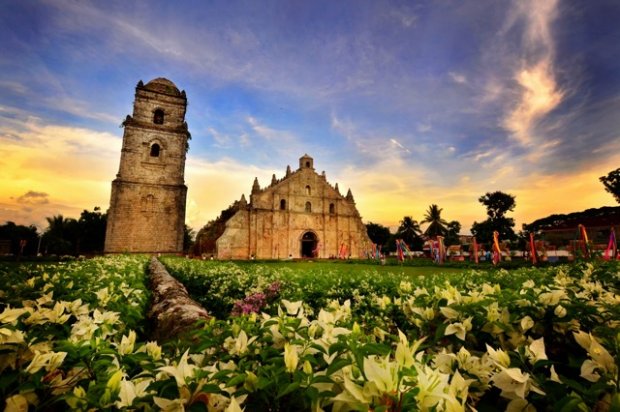 Image credit: Wikipedia
A good number of people embrace Islamic religion in the southern part of the country, but Catholicism remains the Philippines’ major religion. Almost every city has its own old churches, majority of which display strong Spanish influences. Some have even made the list of UNESCO World Heritage Sites.

6. The winding labyrinth of underground river 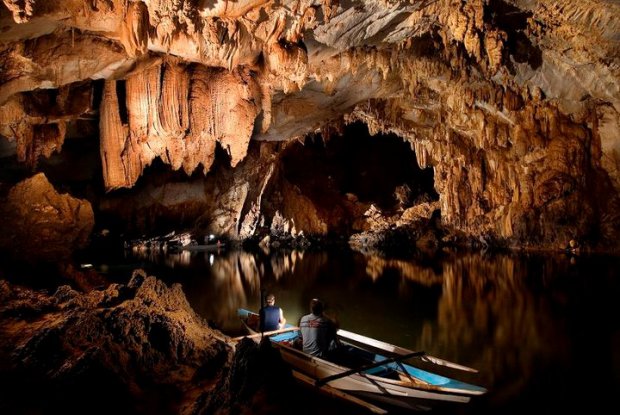 Image credit: jlmtraveltours
Puerto Princesa’s biggest pride, the Subterranean Underground River stretches 8.2 kilometers and said to be the longest navigable underground river in the world. It winds its way underneath a mountain range, through the St. Paul Underground River Cave, and then goes out into the South China Sea. It was hailed as one of the 7 Wonders of Nature in 2012. Image credit: Wikipedia
The bayanihan spirit, referring to the sense of communal cooperation without expecting anything in return, forms an integral part of the Filipinos’ way of life. This is typically exemplified through their actions during times of crisis, such as earthquakes and typhoons. Rest assured that this giving and helpful nature will extend to visitors as well, making for an enjoyable stay especially in the rural villages where a strong sense of community is very much alive. 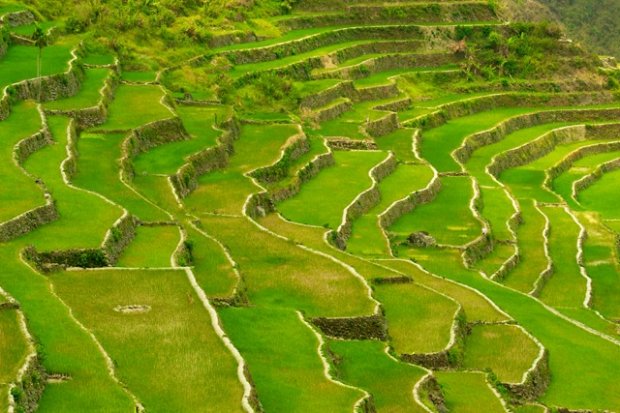 Image credit: Wikipedia
Thanks to the ancestors of the indigenous people in Ifugao, the Philippines is able to boast a 2,000 year old legacy referred by the Filipinos as the “Eighth Wonder of the World”. The Banaue Rice Terraces were built manually with minimal equipment thousands of years ago. To date, locals still plant rice and vegetables on the terraces, which are recognised by UNESCO as a World Heritage Site. 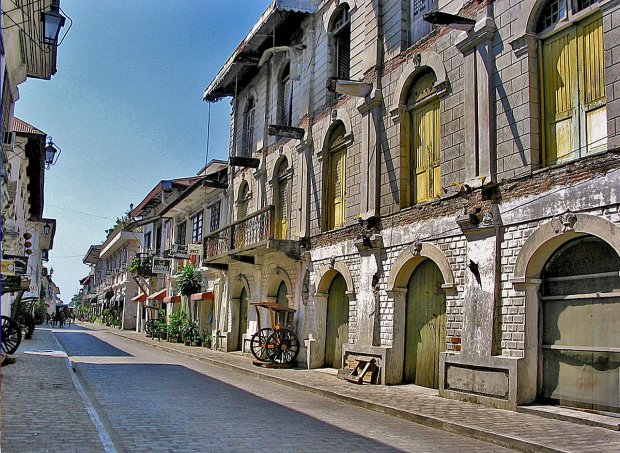 Image credit: Wikipedia commons
If you are a fan of the Philippines’ national hero, Dr. Jose Rizal, you will be happy to get catapulted back to his time when you visit Vigan’s Heritage Village in Ilocos Sur. Old Spanish houses complete with horse-drawn carriages are preserved for posterity here.

10. The island that never sleeps 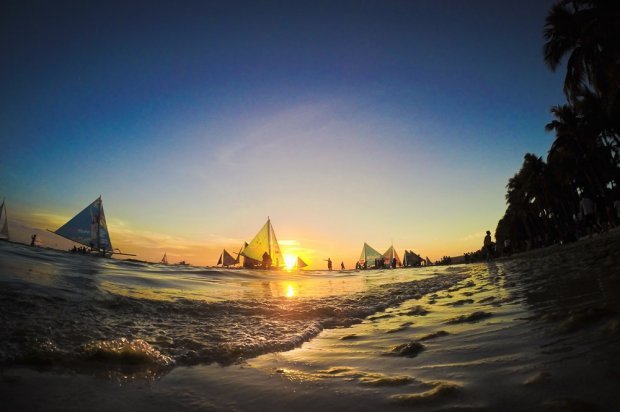 Image credit: Andy Enero
Weekend beach parties in Boracay, Aklan are definitely worth staying up late for. Known for its White Beach that stretches  across 4 kilometres, Boracay Island is the beach party destination in the country— frequented by throngs of tourists and even celebrities. 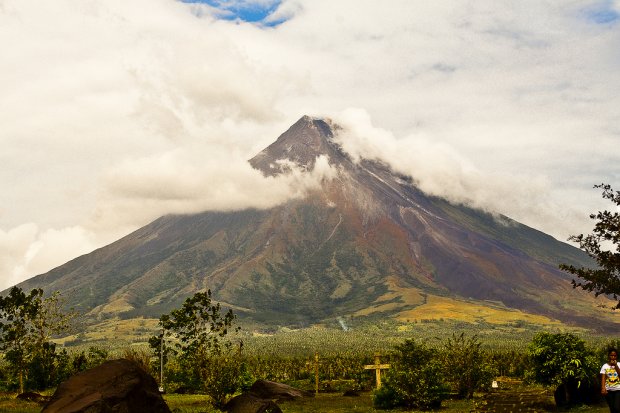 Image credit: Miguel Navaza
Mayon Volcano, an active volcano on the island of Luzon, is renowned for its perfectly symmetrical cone shape. According to folklore, the volcano was named after the legendary heroine Daragang Magayon (Beautiful Lady). It does erupt rather frequently, so be careful! Image credit: Constantine Agustin
The Sinulog is one of the grandest, most colourful and most distinguished festivals in the country. Its name is derived from the Cebuano adverb “sulog” which roughly translates to “like water current movement” — an apt description of the Sinulog dance which features a forward-backward movement. It is celebrated every third Sunday of January in honor of Sr. Sto Nino (Child Jesus), the patron saint of the province of Cebu. The highlight of this nine-day festival is its Grand Parade that ends with awesome fireworks.

13. The charming ruins of Talisay 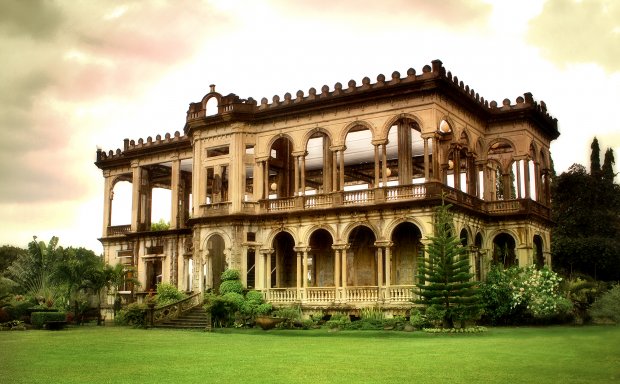 Image credit: Wikipedia Commons
No trip to Negros Occidental, a province in Western Visayas, is complete without visiting The Ruins in Talisay. The 19th century old Neo-Romanesque-inspired mansion was built by local sugar baron Don Mariano Ledesma Lacson for his beloved wife. The house burned down during World War II but the structure of the house remains. It has since been restored and become a popular tourist spot. 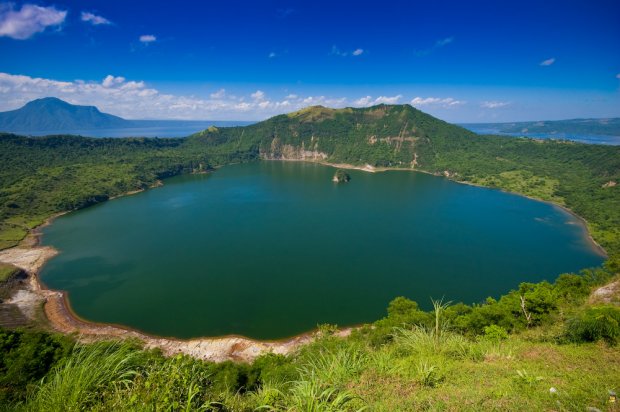 Image credit: Deck Chua
Taal Volcano is a complex volcano in the island of Luzon. It is the second most active volcano in the country, with a historical record of 33 eruptions. All these eruptions are concentrated on an island near the middle of Taal Lake called Volcano Island. In 2013, the volcano made a cameo appearance in Katy Perry’s music video “Roar”.

15. The colourful city of smiles 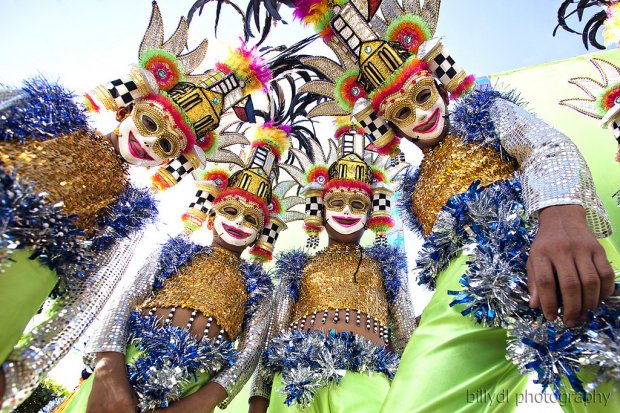 Image credit: Billy Lopue
Bacolod, the City of Smiles, holds its annual colourful masquerade every third weekend of October. The Masskara Festival, a portmanteau of the English word “mass” and the Spanish “kara” which means “face”, started in early 1980s when the city suffered from an economic crisis. Government officials and artists put their heads together and came to a mutual decision: throw a party to uplift the people’s spirits. The celebration is a reminder to the Negrenses to put a smile on their faces when faced with challenges. 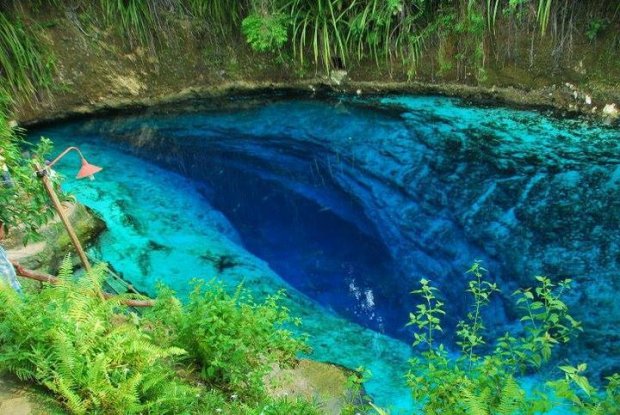 Image credit: Wikipedia
Behind the mountains in a sleepy town of Hinatuan, Surigao Del Sur near the Pacific Ocean lies the stunning Enchanted River. Hidden by a canopy of foliage, its clear blue waters tempt both locals and tourists alike. This mystical beauty is believed to be at least 80 feet deep, and contains a variety of marine life that swim idly with the tourists. In spite of many brave attempts to reach the bottom of the river, no one has been successful yet. 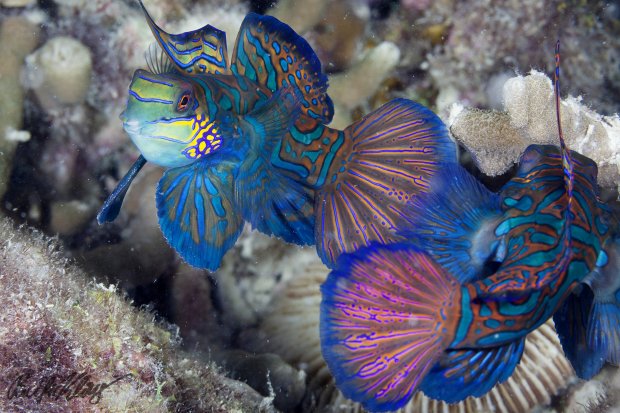 Image credit: Klaus Stiefel
One of the famous marine sanctuaries in the Philippines is Malapascua Island. Located on the northernmost tip of Cebu, Malapascua is a small island known for its wide stretch of white sand, coral gardens and great dive spots including Kemod Shoal, Gato Island and Monad Shoal—an underwater plateau inhabited by manta rays and thresher sharks. 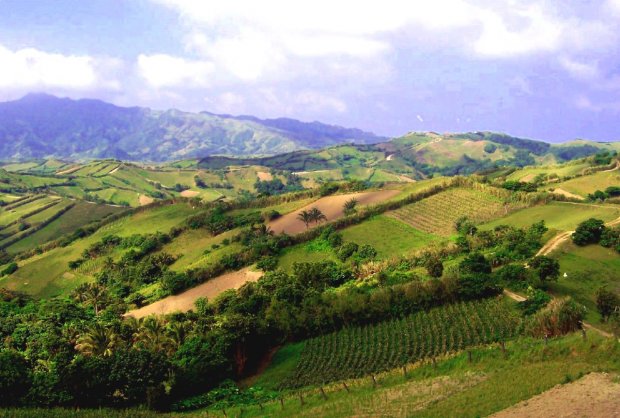 Image credit: Wikipedia
The lush green hills of Batanes are reminiscent of the Windows wallpaper and form the backdrop for the location sets of medieval productions such as Lord of the Rings and Game of Thrones. The hills also offer good spots for taking Facebook-worthy cover shots of the stunning sunset. Oh and you can actually ride around the hills if you have a bicycle. 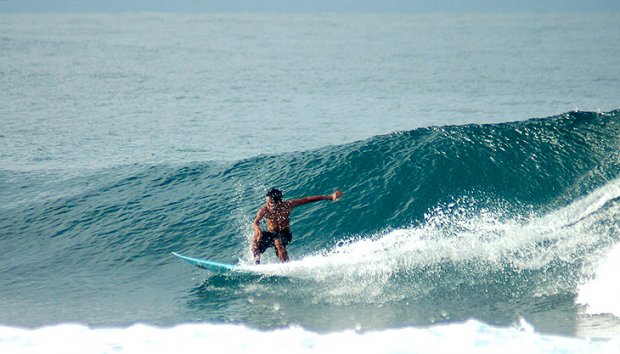 Image credit: Juan Ice
Baler is a capital town in Central Luzon, best known for its historical siege and killer waves. It has awesome spots offering all kinds of waves, making it the ultimate surfer’s haven. For the newbie, Sabang Beach is recommended. It has a wide stretch of grey sand for lazing under the sun. Dapa or Cobra Reef is ideal for the thrill seekers, with waves reaching as high as 14 feet. September to March is the best time to visit, as surfing conditions are optimal.

20. The whale shark capital of the world

Image credit: Wikipedia
Donsol was a sleepy fishing village in one of Sorsogon’s remote areas until 1998 when video footage of divers interacting with whale sharks was widely circulated. Since then, Donsol has made a name for itself as a premier tourist destination for whale shark viewing. Time Magazine even featured swimming with the gentle giants as the Best Animal Encounter in Asia in 2004. The butanding, as locals call them, can be seen between the month of January and May, with sightings peaking from February to April.
This article originally appeared in Tripzilla Magazine on January 2, 2015.

Side Trips in Manila: Day 4